跳至主内容区域
跳至副内容区域
Hu Zhengrong, Ji Deqiang, and Zhang Lei
In 1918, young Mao Zedong left his home in the province of Hunan for the first
time, and went to Beijing to look for new paths for his life. He got a job at the library of Peking University, and stayed there for six months. During that period,he attended a recently founded research group in Peking University, which was called Association of Journalism Study.There is no paperwork documenting that he engaged actively in this research group, or made significant contributions to or benefited greatly from it. In fact, his Hunan accent prevented him from get-ting in the scholarly circles in Beijing and this brought him great frustration.This frustration was a part of the frustration that led him to return to Hunan in 1919.
After going back to Hunan, he created Xiang Jiang Review and other newspapers to criticize the government and call for a revolution. He devoted himself to the press to achieve his political ideals before he got political and military power, just like his Communist predecessors: Karl Marx, Frederic Engels and Lenin.

END_OF_DOCUMENT_TOKEN_TO_BE_REPLACED

At the crossroad of social sciences, communication research has always been the site of interdisciplinary efforts, no matter the extent to which it is institutionalized as a widely-recognized modern discipline. In the reform-era China, the orthodox narratives depict communication research as the articulation of two intellectual traditions in a particular historical conjuncture, namely the Western (mainly US-based) mass communication theories and China’s party journalism studies (Hu, Ji & Zhang, forthcoming). Integrated into the overall process of rebuilding social sciences after the Cultural Revolution, communication research has moved forward in line with the developmental road of China on a basis of a series of interconnected reforms, including the introduction of the principle of (limited) market freedom to planned economy, the catch-up strategy of information and communication technologies (ICTs) following the western counterparts, the changing paradigms of political governance with timely adjustments of the role of the Communist Party, and the “by-invitation” or coincidental (David Harvey, 2005) involvement into the neoliberal world order at the turn of the century. Against this multi-dimensional background, the speech aims to interrogate the dynamics of China’s current great transformation (Shaoguang Wang, 2012), the challenges that face Chinese communication scholars, and possible outcomes for future communication research in China.

END_OF_DOCUMENT_TOKEN_TO_BE_REPLACED

Abstract: The research will observe the latest movement launched by Chinese government in 2009. The movement is aiming to build up Chinese global communication competence and improve China’s national image, play more influential soft power over the world. Chinese government has invested into the infrastructure and related plans. But it still meets some challenges and difficulties which have been hindering China’s rise in global communication. Internally, the current regulatory structure of Chinese government, the potential conflicts among various interest groups backed by different powers, the government-led strategies behind the project and so forth have been obstacles for the movement to be efficient to produce the possible outcomes the policy-makers hope to have. Externally, the ideological contradictions between dominant western media world have exerted more clashing impacts on China’s possible trial in global communication. The values as a base for global communication of China are still unstable and unclear.

END_OF_DOCUMENT_TOKEN_TO_BE_REPLACED 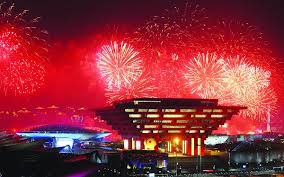 After its accession to WTO in 2001, China has experienced an accelerated integration to the global political-economic order, which often comes with a desire to express and to be known more by the outside world. From the opening ceremony of Beijing Olympic Games to the promotion film of national image in Times Square, while Chinese government has diversified strategies of global communication, multilayered outcomes and uncertainties are still existing and remaining to be examined. A couple of questions need to be further studied. In reality, what are the benefits and shortcomings for Chinese governmental promotion campaigns with respect to international media representation of China? How can we make the linkage between China’s state advertising and its rapid economic development and increasing political influence on a global scale? In light of an ascending tendency of using Confucianism to represent Chinese spirit and history, does China have the ability to reshape the global meaning system around it relying on indigenous cultural elements? What is the core value of China within a globally networked world? By proposing those concerns, this essay tries to introduce China’s recent media “going-out” plan initiated in 2009, and followed by a social-contextual analysis to reveal ambiguities within.

1. The pursuit of a “full” picture in global communication

END_OF_DOCUMENT_TOKEN_TO_BE_REPLACED

Abstract: On July 1st, 2010, 12 cities and regions were finally selected by the Chinese government after several rounds of debates and delays to take part in the country’s three-network convergence trials.[1]The planned network convergence project will enable telecoms and broadcasting companies to deliver IPTV, mobile TV, telephone and Internet services over a unified network. This state-level push is seen as the beginning of the breakthrough of barriers between industry-specific regulators. The intention to avoid overlapped investments, to innovate the media industry and provide cheaper service to customers is more than possible, but the difficulties facing the two most vibrant competitors in China-telecom players under the supervision of the Ministry of Industrial and Information Technology (MIIT) and broadcasters under the State Administration of Radio Film and Television (SARFT) are mounting. The fact that China has the world’s largest number of network users (Internet 384milion, Mobile line 747 million, Fixed line 313million and Cable TV 174 million)[2] makes it the an attractive media market for industry players, all aiming for their piece of the action.. This paper aims to give a general account of the background of three-network convergence in China, the current advances pushed by the authorities and industry at different levels, as well as the implicit policy approaches for the near future. END_OF_DOCUMENT_TOKEN_TO_BE_REPLACED

1. The tenet for Chinese economy in the past three decades is capitalism and economic liberalism. When China starts the reform, the state jumpstarted a massive campaign of privatization. Most of the former state-owned enterprises were either sold or get listed in the stock market. Although the state is still in control of some key industries, the private capital is always welcome in most of the economic sectors. However, the government even withdraws from the public sector, which was supposed to be the responsibility of the government. Tens of thousands of laid-off workers were left unattended; farmers were kicked out of the way of the urban development project without decent compensation; the capital forces dominated education and real estate market, and the health care system is on the brink of collapse. People start joking that education, heal care and housing are “three new big mountains” on the back of ordinary Chinese.

END_OF_DOCUMENT_TOKEN_TO_BE_REPLACED

By Hu Zhengrong, Gao Yunhong
I. Chinese media structure and print media ecology
1. Overview of Chinese media
Just like other countries, China’s media sector consists of print media, electric media and new media. Along with the rapid growth of the Chinese economy, China’s media sector also experienced an incredible increase both in scale and capacity in the recent years. By the end of 2005, the total number of China’s newspapers reached 1,931, with 9,468 kinds of magazines (China Journalism Yearbook 2006). Meanwhile, there were 273 radio stations and 302 TV stations at all levels throughout the country. Subscribers to cable television programs and digital cable television services numbered 128 million and 4 million respectively. Radio broadcasting and television broadcasting coverage rates achieved 94.5% and 95.8% of the country’s 1.3 billion population respectively. (China’s Radio & TV Yearbook 2006). For online media, China has got 54.5 million computers access to the Internet, with the total user of 123 million by the end of June, 2006 (China Internet Network Information Center, 2006). END_OF_DOCUMENT_TOKEN_TO_BE_REPLACED

by HU ZHENGRONG, WANG WEIJIA, ZHENG LIANG
Executive Summary
Whilst China’s huge TV market allures the powerful international media capital, the deficiency and incompetence of domestic program production churn out a great opportunity for overseas TV programs. Facing the state regulation and cultural barrier, how about the current situation of the overseas TV programs and what are the challenge and opportunity for them? This paper focuses on the size of China’s domestic market, production and importation of major TV programs, regulation on the program importation and finally, the future perspective of the development of overseas TV programs in mainland Chinese market. END_OF_DOCUMENT_TOKEN_TO_BE_REPLACED

by Hu Zhengrong, Ph.D Li Jidong, Ph.D candidate
Abstract:
after tracing down the evolution of China’s media policy, this paper analyzes distinctively on the change, the purpose and the efficiency of the media policy after WTO. It is concluded that China’s media policy after WTO is devising a different approach from that before WTO to find the equilibrium between politics and economic values. END_OF_DOCUMENT_TOKEN_TO_BE_REPLACED

Hu_s paper revised for Javnost
| by HU ZHENGRONG
This article examines the forces that have led to the recent restructuring of the Chinese media system. It demonstrates that the current developing situation is the result of the interplay of complex forces. On the one hand, there are conflicts between different levels of the political apparatus, while this apparatus as a whole has a thousand links with economic power, but also a quite different dynamic. At the same time, there is a strong desire to construct large Chinese media conglomerates that can resist the likely incursions END_OF_DOCUMENT_TOKEN_TO_BE_REPLACED